Baltimore Innovations, the masters of moisture control, approached us to help create a stylish and informative animated video. It would explain how they can provide expertise within the Food, Pharmaceuticals and Defence industries to help solve scientific and technical problems, particularly surrounding humidity and moisture.

Firstly, we met to talk through what was needed and to create a detailed brief for the video. We’re strong believers in face-to-face discussions, especially at the outset of a project to help align everyone’s thoughts.

The video was to feature on their updated website, providing an introductory overview of the problems they can help solve and needed to highlight some of the areas that they worked in.

Following this, the client sent us an initial script and we refined to allow us to cover everything that was needed whilst getting the tone and content just right.

Once the script was approved, we knew the client wanted a video that was around 50 seconds long but the look and style of the video required development.

We took some time to send through sample videos, getting feedback and refining what look we were going for before putting together several mood boards. The sample videos narrowed down the options so that we knew the client wanted a 2D animated video which would feature vector graphics including scientists, submersibles and robotics to help illustrate each point.

The mood boards helped to garner further comments from the client regarding colours, shading, style and whether the illustrations were technically accurate or not before we could move on to the animation.

Following this we developed rough colour storyboards using Boords, enabling the client to provide feedback on each section of the video helping to refine the images further. 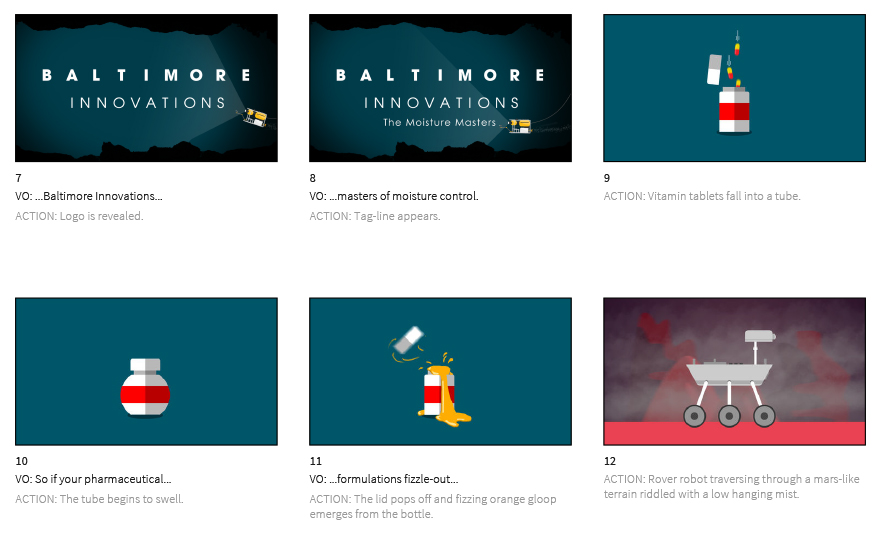 Next up, animation! Initially we recorded a temporary voice over in our in-house recording booth and assembled a rough timeline using the storyboard frames within After Effects to give us approximate timings to work to.

We approached the animation scene-by-scene, initially assembling rough versions before creating higher quality illustrations to swap in place. Each scene was constantly improved upon, adding refinements such as bubbles and lighting to the underwater scene, or particles and fizz to show the tablets exploding. A few breakdowns of the video can be seen below:

We were given some notes from the client early on regarding what music they liked which made the search for the right music track a bit easier. Once we found the right track, we re-recorded a few versions of the voice over to get the tone and emphasis right before moving on to look for appropriate sound effects.

We used a wide variety of sound effects to create the right atmosphere for each section including phone ringtones; underwater bubbles, fizzes, beeps and whirrs as well as general ambient background sounds. This was edited together in Audition, making sure to keep the sound effects below -16db so that the voiceover could still be clearly heard.

Adding a variety of sound effects to create the right atmosphere

Overall, putting together this scientific explainer was a great project to be involved in. The video was constantly refined through the script and initial rough sketches to storyboard development and animation, before the final video was put together to be shown online.