When you’re at the top of your game, like financial consultancy Huntswood, making a thought leadership video is a great way to connect with your industry, and raise your profile among your peers.

We created a series of videos for the team at Huntswood, which began with a thought leadership video about diversity in the financial sector, specifically looking at non-executive directors.

If, like us, you think this is a bit over your head, don’t worry – industry specific thought leadership videos aren’t designed for the everyman. They’re an opportunity for experts to really drill down into the details of their roles, their industry and discuss high level ideas and suggestions. Basically, people who know what they’re talking about, talking about what they know.

From our side of things, we put them in chairs and let them get on with creating the content, only prompting them when something was technically an issue – a stumbled sentence, an over-long answer, or any unwanted noise.

Otherwise, we concentrated on what we do best – making pictures look great.

We filmed with Sony FS7 cameras, with 3 cameras on dollies, at Mount Pleasant Studios in London. Often we shoot as a one-man-band, but on this occasion, we had a crew consisting of a Director, 1 Lighting Cameraman, 1 Camera Operator, 1 Sound Recordist and 2 Camera Assistants.

The client requested a clean, uncluttered look, with the ability to add in graphics during the post production phase, and crucially, a look that could be recreated on another day with different contributors, and potentially in a different studio.

The added graphics were simple, and for illustrative purposes, lifting key phrases and aiding understanding. They had to fit in with the other videos that we’ve created for Huntswood, keeping the style, colours and animation consistent throughout.

The video forms part of a suite of thought leadership videos, with three videos shot in one afternoon, covering a range of topics. 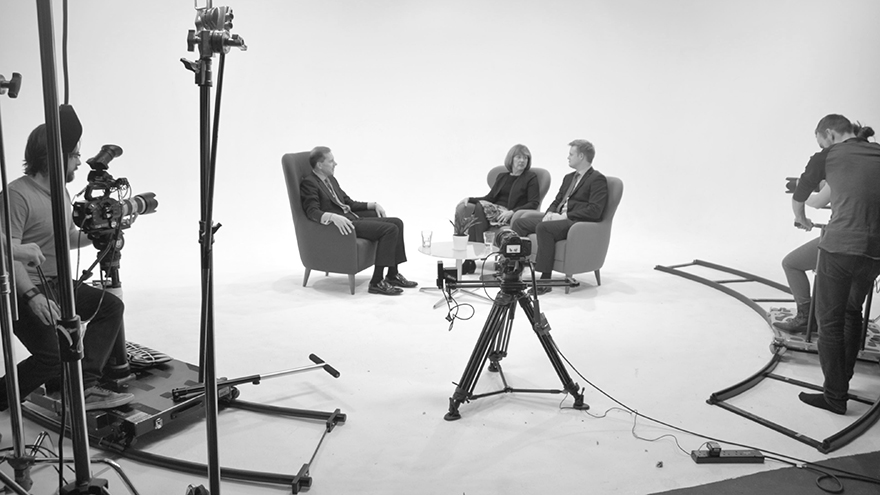 “Truly a pleasure to work with. Their collaborative, professional approach to projects can only be praised. They have always exceeded expectations.”